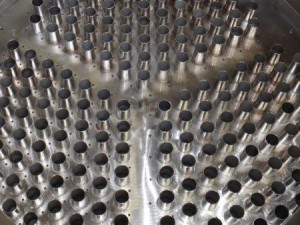 GLM Hydro Evaporator Problem Solving: – One of our dairy customers wanted to produce a new product on their existing falling film evaporator. Unfortunately the whey product they had chosen had a very high calcium content. In the evaporator there was a “standard” type distribution system as we see in 90% of the food related falling film evaporators. It was the type with vapor tubes and small holes for the product to distribute equally on the tube sheet, allowing each tube of the falling film evaporator with an equal and optimum amount of liquid, creating a proper tube coverage. So far so good.

The client was running the system for 10 hours after which they had planned a Cleaning In Place (CIP) in the form of a short acid rise to recover the heat transfer in the tubes. This process resulted in a plugged distribution pan. The reason turned out to be that out of the tubular pre-heater system, the calcium flakes formed an incrustation layer on the tube wall. This layer came off all at once during cleaning. There was so much of it that the flow clogged the distribution-pan, plugging up the distribution holes completely. The customer had to clean the pile of calcium flakes from the distribution pan by hand before they could continue with the CIP, or production for that matter. Understandably not a good situation. I have seen this in other applications as well. Undissolved particles in flakes or fibers that plug up the distribution pan. Undissolved solids in the product get caught and stuck in the distribution pan which all of a sudden starts acting as a strainer.

For these applications we advise to use a special free flowing distribution pan where there are no holes that can plug. This can give you great results, the flakes, fibers or solids will not plug the distribution-pan up anymore. Instead they just go into the flow through the tubes. During CIP the calcium flakes get a chance to dissolve in the acid along the way without the danger of clogging a distribution pan.

I’ve experienced similar problems on a waste water falling film evaporator with circulation on the effects. The bottom part of a boiling tube had traces of incrustation, not enough to cause capacity problems but enough to break loose of the tube, being circulated back into the distribution pan at the top of the evaporator. The distribution pan started to act as a strainer here as well, causing tubes to run dry and creating a snowball effect of incrustation and clogging. In this particular case we managed to improve the required cleaning intervals. Before our recommended updates the installation needed CIP after 3 weeks production, followed by a manual mechanical high pressure wash. After installing a new distribution pan, the cleaning intervals changed to once every 3 months, with a simple 2 hour CIP cleaning. One of those little adjustments with a great result.

Distributing the liquid constant and equally on all the tubes of the falling film evaporator is crucial for its performance, not only during production but also when performing CIP.