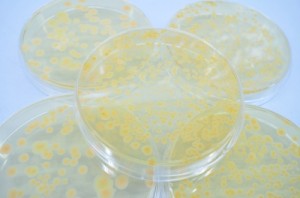 GLM Hydro Evaporator Problem Solving: – I would like to share some of my experience gained over the past 2 decades on bacteriological growth and spore forming in falling film evaporators for the concentration of dairy products for the productions of powders. With the increase of the global production of milk powders, I have seen a significant increase in the market demand for a high quality low spore milk powders.

For me, it all started in the early 90’s with an infant formula project were, in the role of project engineer and project manager, I was responsible for the complete wet process line, such as product blending-, ultra high heat pasteurization-, fat dosing- and evaporation- system up to the dryer high pressure pump. In this project spore and bacteriological reduction and controlling the potential for growth in the evaporator system was extremely important. Our customer had 2 mainstream products, a milk based- and a whey base formula, each product came with its own set of challenges. What I have learned back then is still very useful today as a basis for our new projects or when helping customers with their existing production plants.

Generally, in dairy we can group the falling film evaporators producing the concentrates for the dryers in 2 major groups:

Typical the TVR evaporators have longer retention times on a higher temperature difference across the evaporator. That means that the first effect boiling is usually around 175°F and the last effect boiling at 120°F. Often the first 2 or 3 effects are driven by a thermal vapor compressor to save additional steam. Also characteristic for the multiple effect systems are the long pre-heating routes where the condenser and each effect has its own preheater to save as much energy as possible. These TVR’s are typically early till late 1970’s designs.

The MVR evaporators usually have a large first effect with multiple passes driven by a MVR. The temperature difference between heating (vapor chest) and boiling (MVR suction) is about 6 °K. This means that the product in the evaporator has a temperature around 175°F for the residence time in the evaporator. If higher concentrations are needed, there can be a finisher effect. This is a falling film evaporation step, either with its own steam heat or with a T-off from the MVR with an MVR. Typical designs after the late 70’s up until today.

With the longer residence and pre-heating typically the multiple effect TVR evaporators are more sensitive to grow spores than the MVR evaporators. However don’t be deceived, because in the MVR driven evaporator, due to fouling and/or product holdups, such as internal back mixing, you can still experience undesirable activation and growth of spores. This information is for both kind of evaporators.

For me the best approach to improve the reduction of bacterial growth and control the growth of spores is:

a) Identify the contamination source

It is important that you can take clean samples throughout all steps of your evaporation process. This way you can detect where and when the bacteriological problems and spore growth starts. Know where it all starts so you can narrow your focus down to that specific area.

b)    Know what are you up against

Once you know the problem area, I always advise to stop the production with as little water flush as possible, break the vacuum, open up the system and do an inspection on the fouling before CIP. This way you are able to get a visual of what is happening during a production run. It may be related to product properties or the time/temperature profile of your evaporator system. It may also be related to construction or design flaws. Anything from organic fouling, in-organic fouling, product build up or a CIP that is not quite successful can and most probably will be a source for problems. Especially fouling that is growing over several runs is a perfect source for bacteriological issues. There may also be a stability problem with your product on specific temperature, in some cases a pH correction can bring a lot of stability to the product and reduce the growth of a biofilm. I suggest you study the pre-treatment and time/temperature profiles, this might help you to processing your product in an easier way. It is always better to avoid fouling than to compensate by intermediate cleaning.

On top of that, there is something called a biofilm  in a falling film evaporator, which means a fouling layer of typically a calcium and/or proteins base in the evaporator system. Unlike a clean surface this fouling will create an excellent basis to attach to, it is almost like a safe harbor for spores and bacteria. They are in an ideal surrounding for growth, they are hydrated, have an ideal temperature to cultivate themselves and multiply. The sad result is an exponential growth. Usually over a run time you see that in the first couple of hours the evaporator runs stable, not much to worry about. However, all of a sudden the spores and bacteria in the concentrate of the evaporator starts to grow to unacceptable levels. This is typically fouling with embedded spores. The fouling breaks loose from the preheater or product holding tube or the evaporator (tube) wall  and ends up in the powder.  Normally calcium based fouling is found at the higher temperature section of your pre-heating system, since calcium is reversed soluble (that means that it comes out of solution at higher temperatures) it is most likely to give you fouling issues on higher temperatures. Protein based fouling depends on the temperature, time and often the pH of the product. Protein fouling can be found in pre-heaters trains as well as on higher concentrations, such as the final effects of your evaporator.

e)  Options prior to the falling film evaporation process

In the evaporator you can integrate a Pasteurization or an Ultra High Heat (UHT) step to kill bacteria or in activate the spores. Some installations have a direct steam injection or a direct contact heater. Ultra High Heat type heating will elevate the temperature to 250F-300 F for 2 seconds to inactivate the spores and kill the bacteria. This will give you mostly better results in spore and bacteria count than a longer heat over a lower temperature. Sometimes it is better to change the profile of heating all together and by-pass the long pre-heaters where the spore and bacteria growth is the highest. It will also change your energy balance and other modifications may have to be made.

Another possibility, especially for dairy, is to do a bactofugation which reduces the spores and bacterial cells from the milk or milk product using centrifugal forces. For other products, and dairy as well, ceramic membrane filtration might be another option, where the difference between the particle sizes is used for the separation of bacteria and spores.

Avoid long term exposure (hold up) of your product on temperatures where the spores and bacterial growth is the highest. Some examples of hold-up are high levels in separators and process tanks, back flow or back mixing in the distribution system or in the evaporator sumps, mineral fouling in the separators caused by slow moving product. It is also important to avoid contamination via a leaking pump seal or a vacuum leak in general. If you have an air leak in a vacuum product pipe the chances are that the cold air lowers the product temperature in that spot, this can be that little flaw that can create spores to grow. Needless to say that the distribution should be optimum for guaranteed boiling tube coverage, avoid fouling and incrustation in the evaporator and separator(s). If fouling is inevitable make sure that you run a most effective cleaning so you start with a clean system after every CIP.

1)    Know the source of you problem, identify the source and type of contamination
2)    Start with the lowest possible bacterial and spore counts by working clean.
3)    When possible in your process, physically remove the spores with a membrane filtration or a bactofugation prior to the evaporation process.
4)    Inactivating spores by using the proper time/temperature profile of heat treatment integrated in the evaporation process.
5)    If possible avoid long term exposure (hold up) of your product on temperatures where spore and bacterial growth is the highest.
6)    Avoid fouling so the spores and bacteria can’t nest themselves in an area where they can nurture themselves with all the food and warmth they need to grow.
7)    Run proper pH levels.
8)    Stabilize proteins to avoid fouling.
9)    Check for vacuum leaks on a regular basis.
10) Control the run length, don’t overdo it with your run time.
11) Have a secured and optimized CIP so you start with a clean system every time